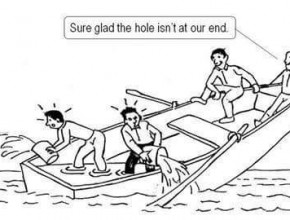 It must be very difficult to heed the clarion call of an unperceived but highly important societal need, especially as its importance is far-reaching, in a relatively unstable and unloved country.

Every year, the socio-economic divide worsens and more unprepared, unequipped and marginalised youths are exposed to the harsh realities of inequality and poverty. This is often despite educational qualifications attained. Simply put, there are no jobs or measures in place to cater for the highest proportion of the population.

The reality is that the trend will most likely continue. Absence of favourable policies, policy makers passionate about youth development, the visible face of corruption and a government highly centred on infrastructural development, which is perceived to be more important, buttress the point.

While claims to the contrary might be made despite promises that have been repeatedly broken, an absent welfare system in the Nigerian society has enabled the “every man for himself” mantra. With this is mind, the youths have aggressively pursued their own agenda, which is often centred on escaping the clutches of poverty, inadvertently showing no interest in events that will potentially shape their future. In addition, guided by beliefs that available resources are being controlled by a few élite, as well as beliefs that they are at the mercy of an older generation, they abandon their civic/social responsibilities.

Although social media has aided in creating exposure and fuelling the need for change, by providing an avenue through which youths can voice their concerns as well as attempt to regain some control, it is not and will never be enough unless shared opinions and ideas can transcend the screens into real world movements. In other words, while an invaluable tool for mobilization and awareness, it does not always translate to action and there lies the problem if left unchecked.

A rather predictable country with leaders that seem to be bereft of ideas, suggests that youths will be relegated continually. It is thus important that youths actively participate in reversing this by adopting the basic tenet of a thriving society, which is collective coöperation. A congruent approach to ensuring that marginalisation does not occur. In addition, the need to combine or pool resources to actively combat society damaging events cannot be over-emphasised; the scourge of terrorism being perpetrated by the misinformed serves as a good example here.

Admittedly, a plethora of issues demands attention in this developing country, Nigeria, with the need for accountability at the forefront. It follows therefore, that all hands must be on deck to push the right agendas and ensure that those in power actively pursue progressive and beneficial agendas/policies, laying the right foundation for future endeavours. Ideally, active participation of the youth, who form a representative proportion of the population, in implementing and influencing further development is vital especially in projects that are not under the purview of the government.

Furthermore, while political, economic and civil causes are often in the spotlight, environmental issues with long-term effect must not be ignored, as it is after all, our future that is on the line.

It is possible to make a difference in the society, in peace building, volunteering, joining forces for a cause, to name a few if not in policy, politics or the economy, and these will invariably lead to the change to we desire. The youth have a role to play; it is time we rose to the challenge.